“It’s not just a four-day thrill,” said Gakuo Ndirangu, a driving force of squash in Kenya, as the 2019 WSF Ambassador Programme visit to the country’s capital Nairobi drew to a close at the Nairobi Club after a comprehensive programme of squash activities led by three of the sport’s leading players. “I cannot find the words to express our feelings about the huge success of this visit, and our gratitude to the WSF team for coming to Kenya to inspire our players,” added Ndirangu.

“But this is just the foundation and now we need to build on it.”

Players young and old from all over Kenya – including three who travelled for 29 hours on a bus from Rwanda to participate in the event – converged on both the Parklands Sports Club and the Nairobi Club for the eighth edition of the annual WSF initiative. The three international stars duly thrilled the local squash enthusiasts (Serme & Golan above with leading Kenyan players Otto Kwach and Keriri Muya) with opportunities to play with them, learn from them and, of course, be photographed with them. At both clubs, the stars entertained the crowds with a light-hearted exhibition match – David and Serme pairing up to take on Golan. As a 12-year-old, Khaaliqa competed in the 2010 Commonwealth Games – playing against Nicol David in the Mixed Doubles event – then later put her education on hold for two years to train for the 2018 Games in Scotland.

“It’s been a really good experience, playing with world-class players – and it’s been a lot of fun as well,” said the now 21-year-old who moves to Canada later this year to begin a degree course at Waterloo University. “And being able to get some help on how to improve my game has been really helpful. I played with both Camille and Nicol and it was a lot of fun.

“Overall I think the visit has been really successful to boost Kenyan squash – it’s what we needed!”

Miss Nimji, already a Level 1 coach, attended the coaching workshop and later had a one-to-one session with Vlassaks: “Ronny did give me some really good tips. It was a really tough session, in fact, but I enjoyed it! He said that, with what he told me, I can improve my game within a couple of months.”

Younger brother Muqs pitted his wits against Serme and Golan and plans to further his love for squash at Birmingham University in England – a university with a strong tradition in the sport, where he will study Sports Science.

The coaching workshops created a good deal of interest and were well-attended.

“The sessions were a big success – there were a lot of participants on the course, more than 20,” said Vlassaks, now the Director of Squash at Squash on Fire in Washington DC.

“I did it a bit differently from last time, it was a bit more practical and more interactive. I showed them a lot about what I’m doing and I think they found that very interesting as they don’t have a good coaching background here yet.

“Also I definitely thought that I changed some minds in terms of coaching – about how you look at coaching and how you develop a player from the beginning. Not only looking at the hitting, but everything that happens before that as well. So from these points of view, I think this was a very successful Ambassador Programme Coaching workshop.

“There’s only one way to take this forward – for the federation, or maybe the clubs here, to organise a structure for coaches so they can develop more players. I’ve told them I’m willing to help and give them advice – and willing to visit them to run a coaches camp.”

Despite the lack of a single qualified referee in the country, Marko Podgorsek’s workshop attracted significant interest.

“There isn’t a single qualified referee in the whole country but hopefully that’s going to change in a short time, especially with their involvement in the WSO (‘World Squash Officiating’) online courses and the exams,” Podgorsek explained. “Hopefully they will undertake those. “I think I have managed to give them a basic insight into the technicalities of squash refereeing and the process of decision-making which hopefully should raise their standard of refereeing and understanding of the game.

“They are all players to a decent level, which also helps a lot, and from what I have seen they appear to be quite eager to take a step forward and establish a refereeing organisation and meet on a regular basis for all them to progress within the refereeing business.”

Rwanda, without a national federation, boasts just two courts in the whole country. But, despite a 1,200 Km journey, enthusiasts Gafirita Emmanuel, 25, Habimana Christian, 28, and 20-year-old Christian Shema took full advantage of the Kenya visit, discovering world-class squash for the first time and participating in both the coaching and refereeing workshops. 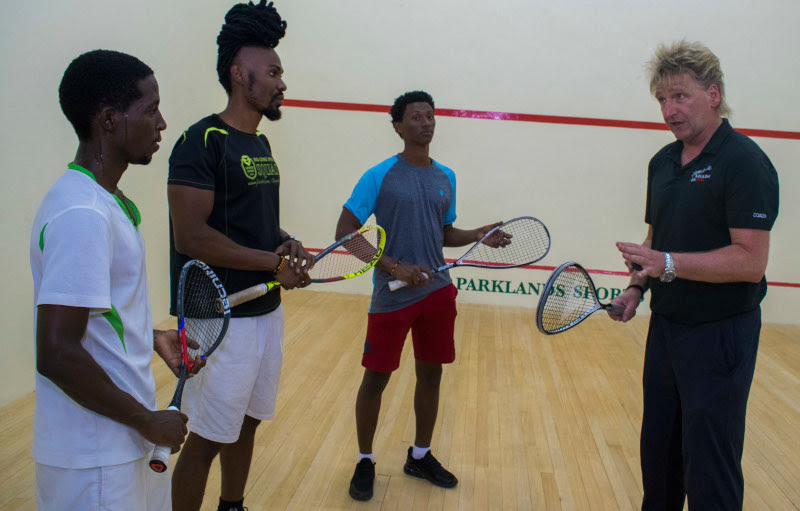 “Coming here was very important for us,” said Shema. “We have gained a lot of knowledge about squash and the way to teach people how to play. We will be working hard to grow squash in Rwanda in the provinces – not just in the capital Kigali.

“We want to be ambassadors in our own country and show Rwandans that squash is a very good game.”

At the press conference at Parklands Sports Club, club chairman Sam Waweri announced that the club was launching a sports academy. The private club is opening its doors for youngsters to come in free to learn how to play squash.

“We want to take squash to the next level, and we are privileged to have you WSF Ambassadors here.”

David, Golan and Serme thrilled the local players and, as a result, have undoubtedly earned an army of Kenyan fans. “We’ve had a great few days at the two different clubs where we have seen many, many people showing up to share time on court with us and asking lots of questions,” said Serme, runner-up in the season-ending PSA World Tour Finals championship in Egypt last month.

“So I’m very happy with this week in Kenya. I was impressed with Khaaliqa – I’m sure she could become a good player – and I will remember those three guys from Rwanda, coming such a long way to be with us.”

Golan added: “There are some good players here, juniors and seniors, and some who want to go professional like Muqs, the number one. The main thing here is that everyone here is really interested, very enthusiastic and want to improve their game. They ask questions all the time – what they can do to improve and how they can prepare for the game. “We had some great days of squash and learnt a lot from them,” continued the 16-time Spanish national champion. “These two clubs were unbelievable – a lot of other clubs around the world have more courts and more players, but their enthusiasm is really special. It’s clear they want to take squash to another level. They love the game so much here, which is what impressed me. I was very happy to be here and help them in some way.”

In summing up the impact of the Kenya visit, Gakuo Ndirangu said: “The future here now is very bright. We have always had a lot of enthusiasm for the sport, but it has needed to be energised – and your team has done this over the past few days.

“There are a lot of sponsors who said they were willing to help us, but this programme has given them confidence. ‘As long as you are doing initiatives like this, we will support you,’ they have said.

“The juniors are our focus and in ten years time, we expect to have a strong presence in the world of squash.

“It is very exciting that squash is the leading sport at the new Sports Academy at Parklands,” Ndirangu continued. “The fact that they are offering this to kids free is a big step.

“Our aim is to increase the base of squash players – especially kids – so that when they are at a reasonable level, we will have a big pool to choose from.

“Our government too is very supportive and as soon as we have structures in place, I am confident we will get their backing.”

WSF CEO Andrew Shelley concluded: “Year on year, the WSF Ambassadors Programme has allowed us to link with and support squash nations. This year has been no exception – but was exceptional. “The local leadership, the volunteers, players and clubs are all completely aligned in wanting to develop squash in Kenya – something that we were able to support in a small way with coaching and refereeing workshops, our wonderful players integrating with the community and helping raise the profile of the sport in the media. The hospitality we received was superb too.”

“We can be certain that an energising of squash is now well underway in Kenya.”