If I had 10 euros/dollars every time someone asked me what was the secret of Egyptian Squash success…. My answer is always the same: The Egyptian Mothers. Meet one of them.

Most of you probably never heard of Nada Hamdy. And you probably wouldn’t notice her in a crowd. She is discreet. Always with a Jocund little smile. And always, always with a bag full of goodies. Food that she endlessly cooks for us all. Sweets. Chocolates. Little gifts for this one. For that one. I call her The Egyptian Mary Poppins – because of the Magic Bag…

But most of all, in her bag, there is love. For squash in general, and Egyptian Squash in particular. Love of sharing, that’s paramount for her. Sharing the successes and the failures, the emotions, the the tears.

Nada was an engineer but she stopped her professional activities when her kids were born, Nour and Ziad El-Sharkawy – you might remember the name Nour El-Sharkawy from the last BlackBall event in March 2022 where she was a wild card.

Nada’s husband, Mohamed, was a fencer, but still plays squash under 45, and their children enjoyed swimming, gymnastics at Wadi Degla… Still, as so many of us, fell in love with squash.

“Nour started at 7, she is now 18, Ziad is 15. We got more involved in squash thanks to Captain Omar Elborolossy and Captain Hesham Attar. And we loved squash more and more.

“So we started to go to and enjoy tournaments, and I got more and more involved, little by little.”

Nada is one of those mothers that know how to organise and gather the kids together under the Wadi Degla umbrella, in the “biggest team”, at the Maadi Branch.

“Just like one family, we eat together, have fun together, we love and support each other. We have to cheer for all the kids, support all of them” she smiles.

“When we play in the Leagues, we bring fruits, food, drinks.. We have enough food for everybody!

Do you remember that World Championship where Raneem had 4 match balls in the 4th against? Nicol David? Nada remembers it well as well, as it’s the event she started reporting on the tournament, taking photos, posting results, little quotes of the players, young and old.

“As a mum, I was taking photos of the kids with Raneem, Nouran, Nicol, Laura Massaro… And it sort of snowballed from there” she recalls.

Ah and in the 2016 World Champ in Wadi Degla, I did some cookies with the faces of the players on them, everyone of the top 10!

“So, I was told why don’t you join the most read facebook squash page in Egypt called Misr Squash News (نشرة أخبار الاسكواش في مصر), along with Sahar Moustafa. And I said, OK, I’ll be an admin with you. , that’s how I started” she concludes.

‘The secret is: the Mothers’

Since then, she works endlessly, relentlessly to inform Squash Passionate on Egyptian Social Media, she takes photos, reports on the results, the matches, and takes pride in the fact she’s got a great relationship with the Squash Players Mothers. As I often state, the Secret to Egyptian Success in Squash is the MOTHERS! And Nada concurs:

“Yes, Fram, they are THE secret. We have to support the mothers before anything else. She’s the main support, The support system. Yeah. Yeah. She’s the main core for, for the player.

“I love everyone in squash, the Fathers too of course, but I have a privilege relationship with them as I am a mother, I can feel what they feel, when they are sad, how tough it is to support your children in victory or defeat.

Nada knows all the players inside out – Ali Farag for example loves her Guava juice, yes out of her Mary Poppins bag – and she  supports the Wadi Degla players obviously, but not only. For example, she has a close relationship with the two Egyptian Golden Couples, Ali/Nour and Raneem/Tarek. 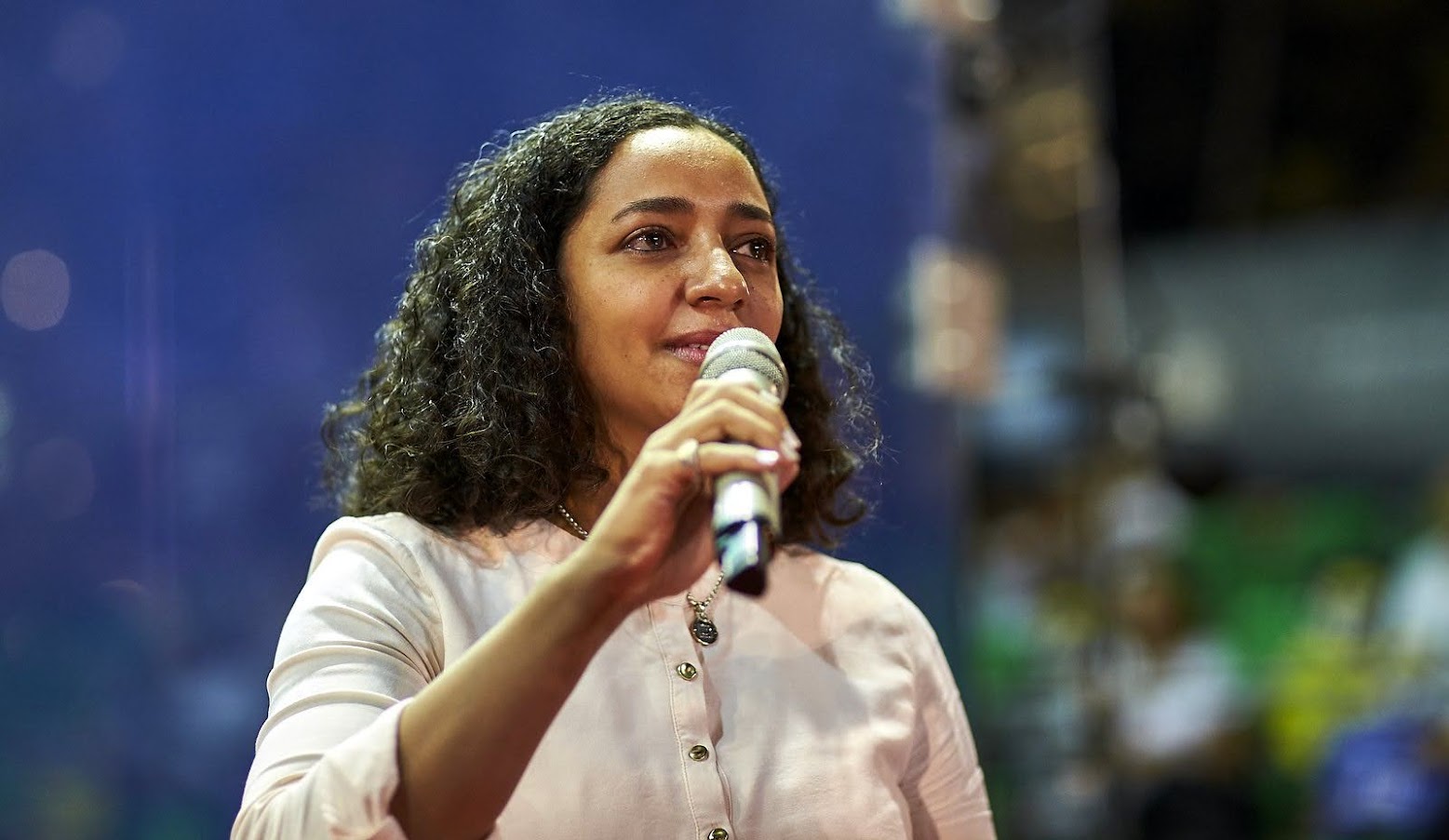 “I think my worst memory of Squash is when we heard Raneem was retiring. All of us, all the mothers, we just burst into tears.” she recalls. “And on the other hand, one of my best memories is when I heard that Nour El Tayeb was going back to competition and the day she came back to the top 10, we were so proud of her!

“Of course, I will never forget that moment Raneem finally became World Champion in 2017, it was a fantastic time for us, we were cheering and shouting at the club, she is an icon for sure. 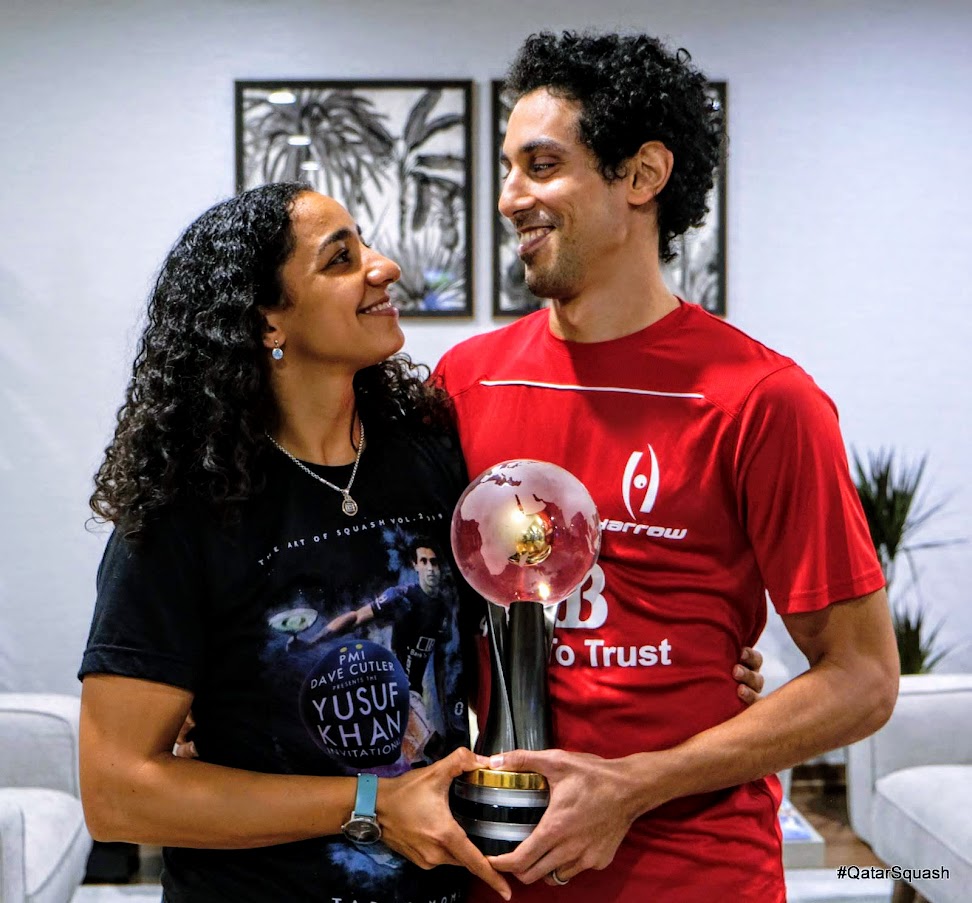 But also, a very important memory was when Tarek became world Champion in 2019 in Qatar, that was a very special moment. I love those two so much, Raneem and Tarek, they are like brother and sister to me.

And last but not least, when Ali became World Champion in 2021, after Farida was born (Ali and Nour’s daughter), he needed that title so much. 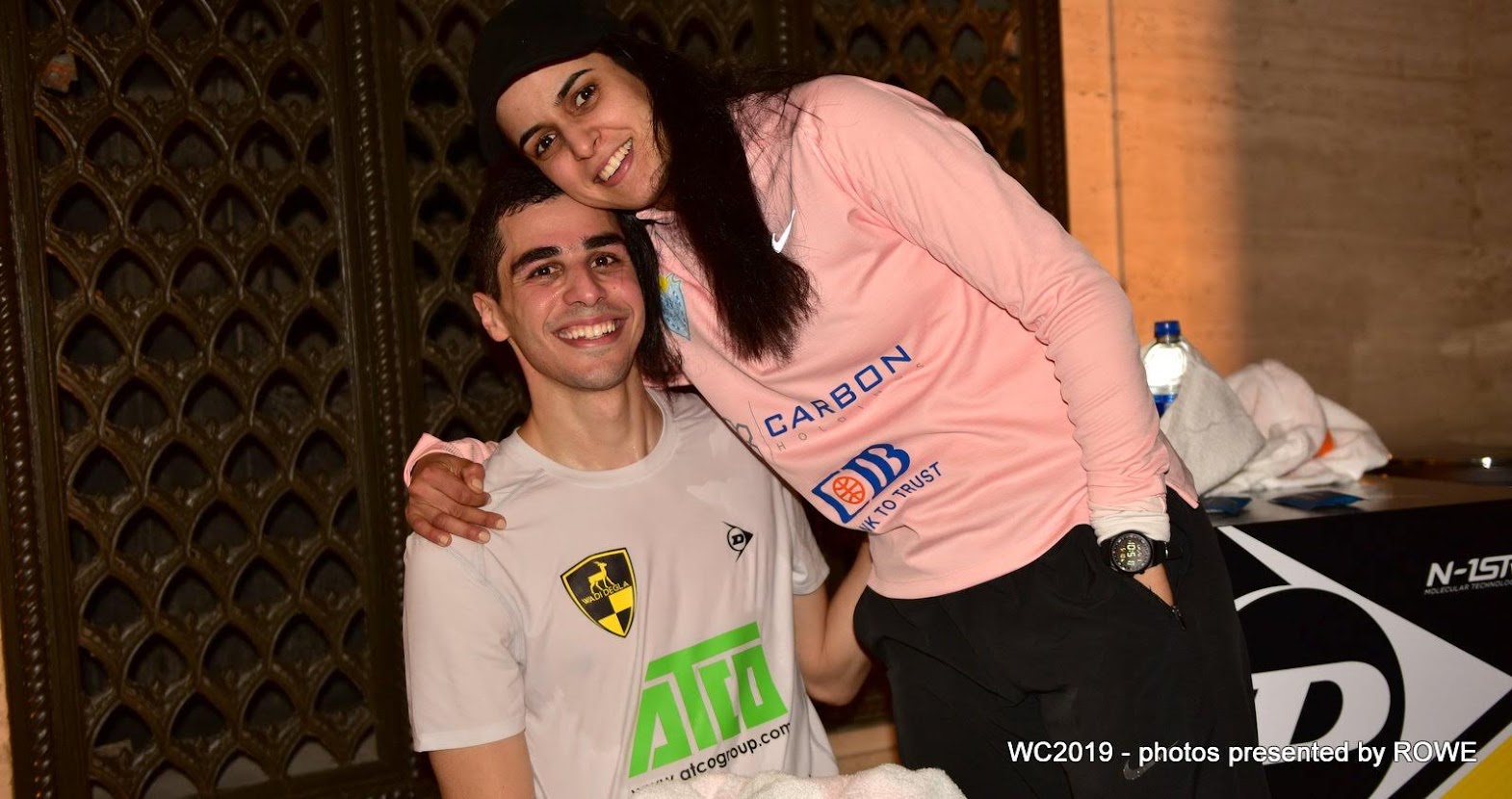 Her vision/wishes for the Future

“I wish we all could be united, as one family. No conspiracy theory, no anger, no bad feelings. I would like that all of us would become Squash Ambassadors. Like the top players, all the kids love to come and watch their players in competition. They are so proud of them, we are so proud of them. Ali, Raneem, Nouran, Tarek, and so many others are wonderful role models” she feels.

“It all about representing our country, our sport, our club. I miss Shabana, on and off court. He is a very special character, love him to bits, I particularly liked his way of dealing with his opponents” she smiles.

“Also, I often think of the Mother Of Egyptian Squash, Dr Samiha, she inspired all of us, she did so much for the sport, for Egypt, for the Women. [Dr Samiha Aboulmagd took the Egyptian women to the top and died of Cancer in May 2018].

“Of course, I would like to see our sport getting better, stronger, and getting finally into the Olympics Insh’Allah. I would like all the Egyptian players to be united and still in the top 10 in the coming years! We have a lot of kids coming up, they are fantastic, boys and girls.

Wishful thinking: I would like peace amongst the players, and I would like to see all the Egyptian coaches who left for the States to come back to Egypt, we need them back…”