World No.41 Youssef Ibrahim came back from match ball down to cause one of the biggest upsets in Qatar Classic history, sending top seed Mohamed ElShorbagy out of the 2020 edition of the PSA World Tour Platinum event held in Doha following a five-game thriller.

Ibrahim, 21, is appearing in only his fifth Platinum tournament, while 29-year-old ElShorbagy is a seasoned professional and has notched up three Qatar Classic titles in the past, while the Bristol-based Egyptian held the World No.1 spot as recently as October. 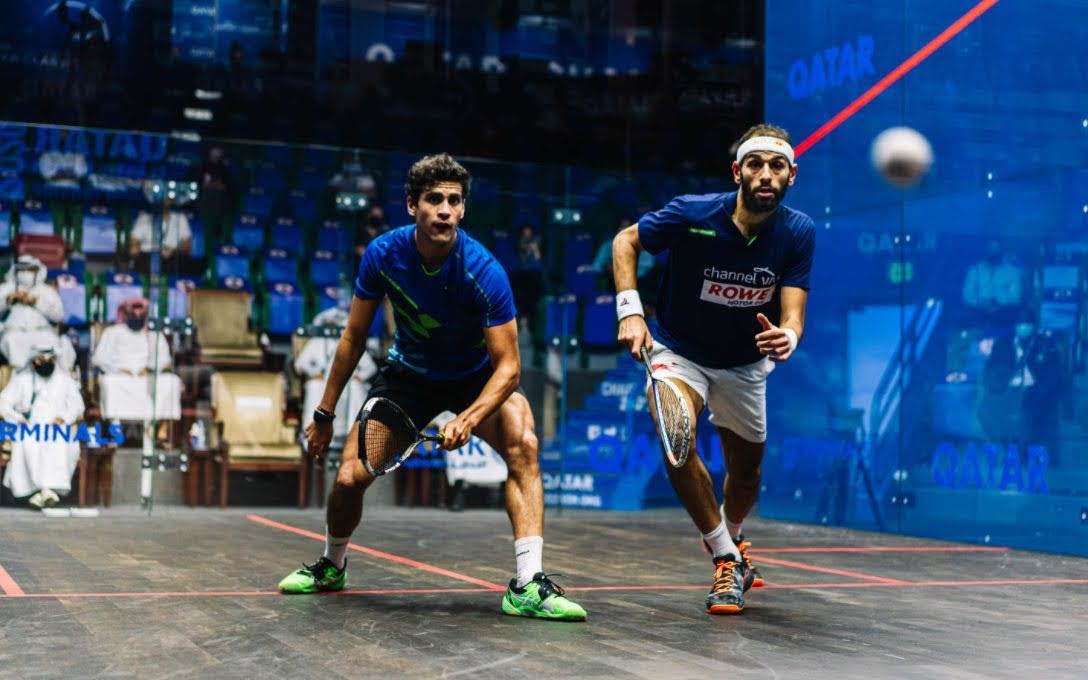 But Ibrahim put in the finest performance of his PSA career to date as he overturned a match ball opportunity for his opponent in the fourth game to draw level, and he seldom put a foot wrong in the decider to reach the quarter-finals of a Platinum event for the first time.

“I don’t know how to describe how I’m feeling right now,” Ibrahim said following the match.

“I’ve been waiting for a break for a really long time and training really hard for so many years and I haven’t had a good win, this just makes it so much better. It’s a rollercoaster of emotions, to beat someone like Mohamed in his form and where he is now, top seed of the tournament, it’s just massive. I knew I was in for a fight, I had nothing to lose today.

“I put 100% into every shot in every game and I know he has a lot of experience, I had to be aware every game and when I took the lead, I usually squander the lead in so many matches, but against Mohamed I had to be on my toes the whole match. I will not doubt myself after beating Mohamed.”

Ibrahim will line up against fellow Egyptian Fares Dessouky in the next round. Both players are appearing in their maiden Qatar Classic quarter-finals, and Dessouky booked his last eight spot courtesy of a win over Spanish veteran Borja Golan.

There was almost another upset earlier on in the day when World No.17 Gregoire Marche took World No.5 Paul Coll to five games. 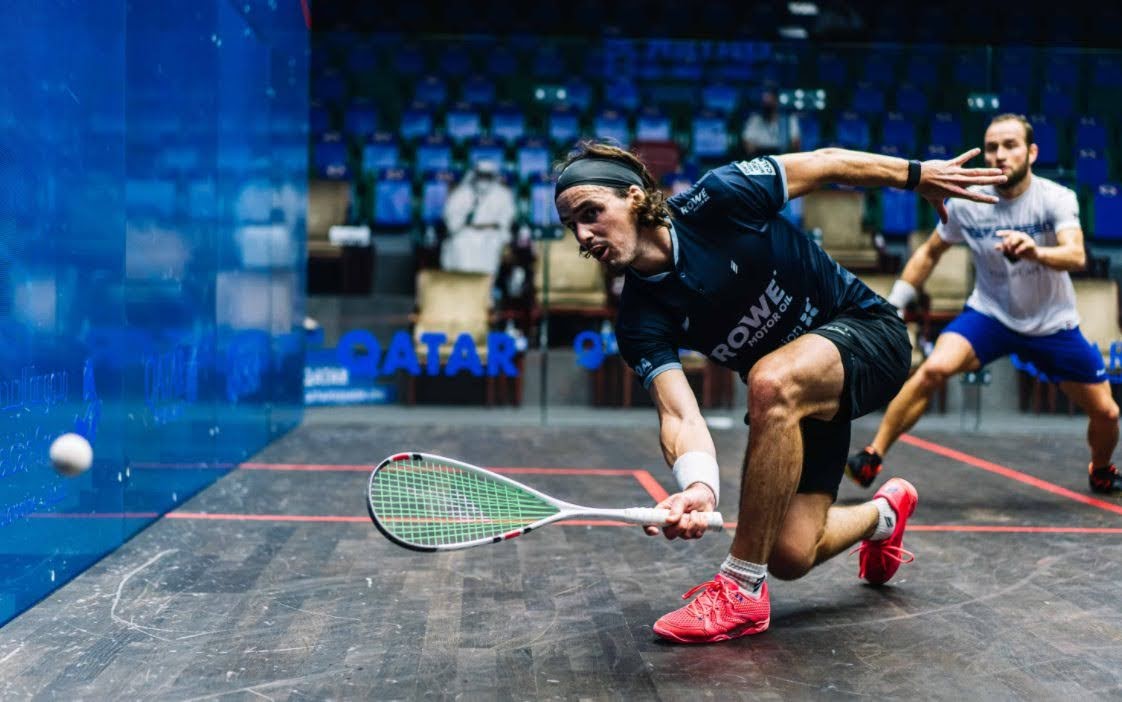 Coll, who reached the PSA Men’s World Championship final here in Doha 12 months ago, came close to a premature exit but recovered from 2-1 down to see off the Frenchman, setting up a meeting with World No.6 Marwan ElShorbagy, who beat Raphael Kandra.

“He came out very aggressive and I was a bit passive in my hitting,” said Coll.

“He actually didn’t miss much the first set, rolled a few. The second and third, I think I made a few mistakes at the start of each which gave him a lead. In the fourth and fifth I just wanted to cut those out because I was winning the back end of the games, and I thought that if I got a lead at the start then I could hold that through each set.”

The man Coll lost to in last year’s World Championship final, Tarek Momen, is also through to the quarter-finals following a 3-1 victory over 2005 Qatar Classic champion James Willstrop. 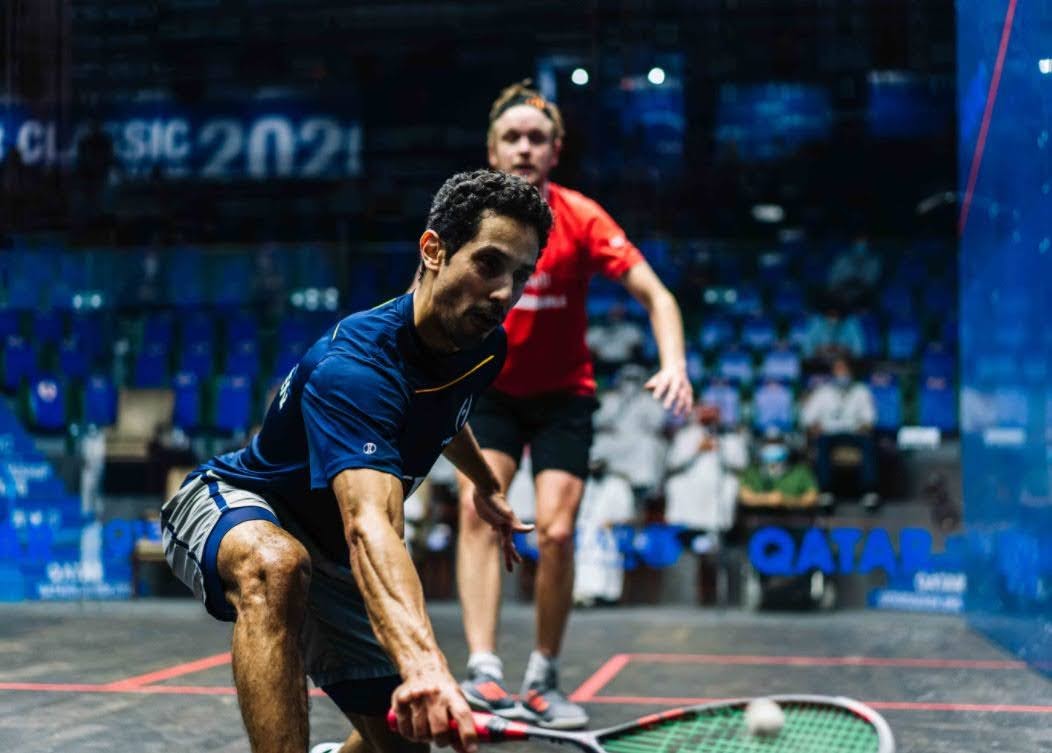 “As always it’s a pleasure to play James,” said Momen.

“He’s one of the incredible talents and it’s always very tricky. I tried as hard as possible to expose his movement a bit, I succeeded in some patches but in some other patches my concentration levels were up and down. Overall, I’m happy with the performance and all credit to James, he played a great match today.”

The final match of the day saw an all-South American battle take place as 23-year-old Peruvian Diego Elias took on Miguel Rodriguez of Colombia, with the former claiming an 11-9, 11-4, 11-8 victory to claim his first win over his opponent at the fifth attempt. 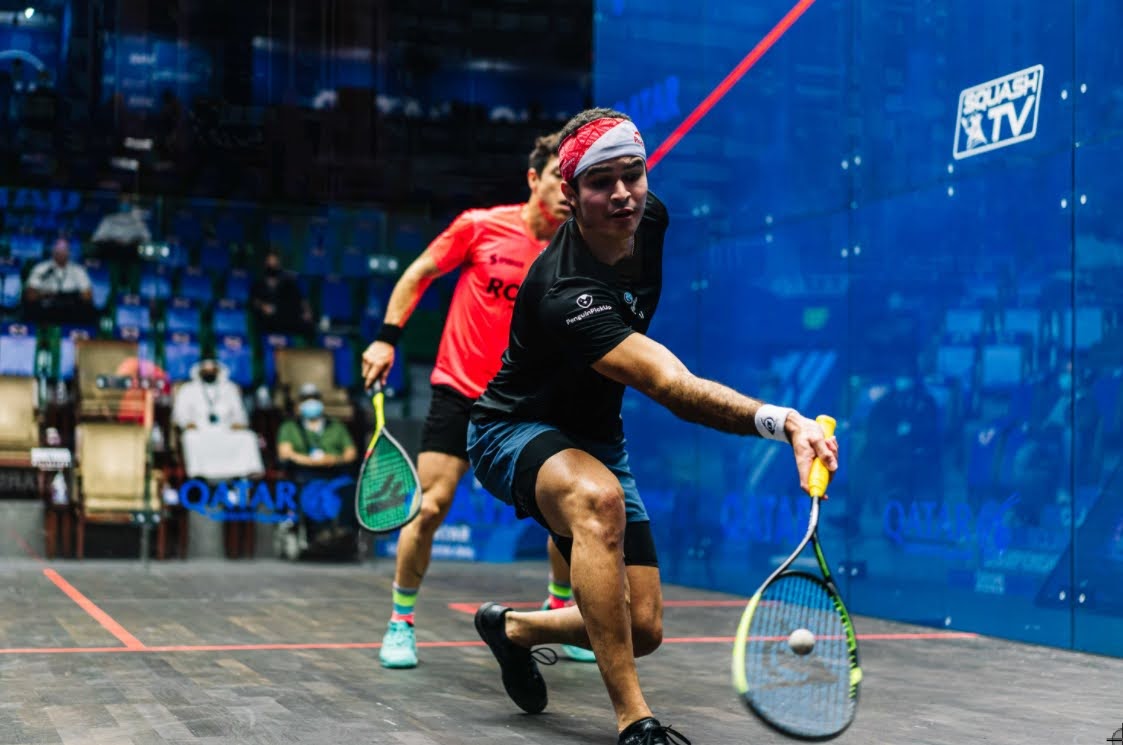 Despite the 11-year age gap between the two, Rodriguez’s athleticism was impressive as he kept on getting the ball back during some exhibition-style rallies. But Elias had more guile and completed a win which will see him take on defending champion Ali Farag for a place in the semi-finals.

“I knew it was going to be really tough, I’ve never beaten him on PSA,” Elias said.

“He’s beaten me in total probably more than 30 times, so every time I play him I know it’s going to be super hard. A lot of it is mental too, he’s a great player and I have a lot of respect for him and I’m really happy I could go through this match in three games. I’ve only beaten Ali [Farag] twice and he’s beaten me more than 10, so it’s a really tough match.”

World No.1 Farag overcame Malaysia’s Eain Yow Ng in a comfortable 3-0 win, while the other match of the day saw Makin dispatch Frenchman Lucas Serme.

The quarter-finals take place tomorrow (November 5). Play starts at 15:00 (GMT+3) and will be shown live on SQUASHTV.